M&A Activity in the Asia Pacific Region Past, Present and a Look Forward

The overall objective for this article is to provide a current perspective on the M&A market across the AP region.  To try to accomplish this objective we have provided a look back at the situation in 2020 and 2021 and then taken a closer look at 2022 and the prospects for M&A activity going forward.

The reality is that both the level of M&A activity and the business focus for dealmakers across the Asia Pacific region is in transition. Close examination of 2022 shows significant changes occurring in all aspects of mergers and acquisitions in the region. These significance of these changes in 2022 are increasing month to month even when comparing Q1 to Q2 and then into July and August of this year. The message seems to be “buyer beware”.

China, as always, is at the forefront of the AP M&A marketplace. Based on the research done for this article, the pace of change is M&A driven business strategies by companies in China and the constraints being imposed by government that impact deal making, the future is at best clouded with uncertainty.

To fully understand the current and future state of mergers and acquisitions (M&A) across the Asia Pacific Region, it is important to look back at what was going on in 2020 and 2021.

2021 saw a major increase in M&A activity around the globe. In the Asia Pacific Region, M&A deals were more than twenty (20%) percent higher than in 2020. This increase did not reveal any significantly influence from the emergence of the COVID-19 pandemic. In part, this can be attributed to the many deals that were already in progress prior to its advent. The total number of deals I 2021 actually exceeded the pre-pandemic period of 2019.

Two differentiating characteristics of the AP M&A market is that the main “deal drivers” tends to be on the buy-side and most of the AP buyers are Asia Pacific based. This has proven to be a positive for Asian companies. Geographic proximity is a source of advantage in deal cultivation process as social, cultural, and language are a necessary part achieving a successful M&A result.  AP based buyers have a head start in identifying prospective targets within their own countries and in developing meaningful interactions with people in these companies at the pre-deal stage.

The Asia Pacific region was affected by Covid before other parts of the world but held up more robustly that elsewhere. By Q3 2020, the AP market had set a record quarterly high. This growth continued into 2021, with the first nine months outstripping every full year since 2015. IN 2021 AP deals totaled USD 892 billion invested across 3,802 deals. China, the world’s second-largest economy, was the number one contender, claiming 39.5% of the total regional deal value. Australia was a distant second place with a 17.6% share of invested capital. 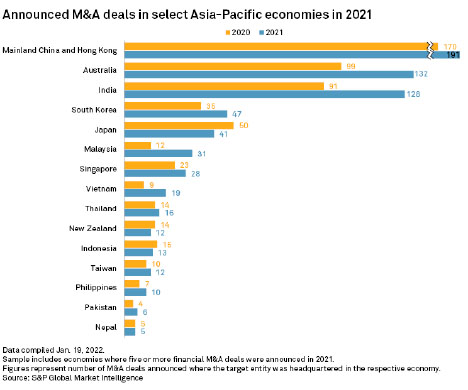 As revealed in Global M&A Dealmakers Report 2022, a survey of 300 global dealmakers, AP respondents are remarkably bullish on the prospects for continued growth in the level or M&A activity, 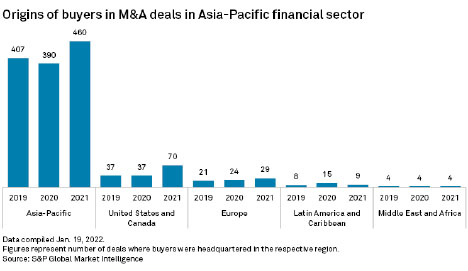 Deal drivers and influencers on M&A activity in Asia Pacific

In researching for this article, information and data gathered suggests that Asia Pacific companies are leveraging M&A as a vehicle to transform their businesses. AP companies, which represent a broad cross-section of industry sectors, are experiencing increasing pressure to transform their businesses to keep pace with the key business transitions or changes occurring in the AP region.

Among the most prominent issues influencing M&A activities and/or driving companies to alter their strategies going forward include (Table: 2):

ESG regulations and sentiments, across the Asia Pacific region, match that of North America. There are expectations of greater corporate obligations to address these issues, but the level of engagement and commitment varies. This is in contrast with the situation in the EMEA region. European policymakers are leading the charge to adopt ESG policies that align with the key objectives for sustainability and the goals set forth in the Paris Accords.

Forty-five (45%) percent of AP respondents expect a moderate increase in scrutiny regarding ESG concerns, and 29% foresee no change at all — a greater proportion than those who anticipate a significant increase in ESG regulations (19%). When asked if they expect ESG considerations to impact the type of M&A deals over the next three years, AP deal makers responded as shown in the following chart (Figure 2).

Figure 2: Anticipated Impact of ESG on Deals over Next 3-Years

Research data gathered for this article has indicated that AP countries have made considerable efforts to improve ESG disclosures. Chinese regulators initially set a goal for mandatory disclosures for listed companies by the end of 2020. This was delayed to the end of 2021 due to the pandemic. Less developed AP countries are also making considerable progress. For example, starting in 2023, the Philippines regulators will require publicly listed companies to submit sustainability reports, improving transparency for investors.

Today, transparency is lacking throughout much of the AP countries. Most AP respondents (27 percent) cite the lack of (or quality of) sustainability data as the major challenge they face when making ESG-oriented investments. This mirrors responses to surveys from not only M&A participants in North America but also those M&A active companies in the EMEA region. It also may indicate that, while progress in this area has been positive, much more needs to be done This includes standardizing sustainability metrics to level the playing field and mandating non-financial reporting audits.

It is the ‘G’ in ESG that takes precedence for dealmakers in AP region compared with other parts of the world. Half (44%) of respondents say that their primary ESG priority is business ethics and transparency when weighing up investments, ahead of any other region. The number one factor that would compel AP respondents to have a wider consideration of ESG matters are regulatory requirements (29%), followed closely by favorable corporate image (27%).

This view is shared in EMEA too, illustrating the influence a two-pronged effect of top-down policymaking and bottom-up consumer demand can have in shaping corporate conduct and M&A strategies.

There is no question that the Asia Pacific M&A market is in transition. As the year 2022 has proceeded, a variety of changes have surfaced in Q2 and into Q3 that were not as apparent in Q1. Earlier in 2022, despite major geopolitical and financial headwinds, AP M&A activity was at a level similar to those experienced in 2021.  M&A data for the AP region showed 648 deals with a total value of US $403b, M&A activity through July 2022, however, has seen a drop compared to this time last year (down 14% by value and 16% by volume).

As expected, China was the most active M&A country in the Asia Pacific region. In the first half of 2022 China had M&A deals totaling USD $144b. Following China, Australia ranked as #2 on the list. Australia has had an extremely active start to the year with the combined value of its outbound, inbound, and domestic deals jumping to US $48b. This represented an increase of 123% compared to the average of the last deal cycle (2015–19).

Sector performance (industry or market) data indicates that cross-sector deals, focusing on technology, were the most sought after through Q2 2022.   Key drivers for this trend have been diversification and the importance of keeping pace with emerging trends in fields such as digital electronics and communication methodologies. Technology targeted AP deals represented 68% of total deal volume and 55% of total deal value. Non-technology deals, in contrast, were down 54% from the prior year.

The specter of a fragile global economy, the emerging global macro-economic and geopolitical challenges, and an increased regulatory intervention has brought some darkening clouds into the M&A picture. While M&A activity has shown growth during the first half of 2022, the sources and availability of capital to support future M&A growth equal to prior year levels is changing.

In particular, private capital funding is playing an increasing role in supporting the continued level of M&A activity in the AP region. Private equity activity surged 47% in the first half of 2022. Even though capital market conditions have tightened sharply through the first half of 2022, PE firms still have substantial amounts of cash that will need to be deployed in the latter half of the year. In addition, as economic conditions tighten, the role of more accessible high interest, capital funds will help prop-up the Asia Pacific M&A market. As interest rates rise, expect to see fundraising shift from growth-oriented, future-value sectors to those with a focus on strength of earnings and pricing power.

China- Its Leadership and Is Challenges for M&A Going Forward

There used to be an old expression that financially speaking if the US had a cold the rest of the world had pneumonia.  For the AP that feeling is spot on with respect to China.  China drives the entire AP economy in a variety of ways. China has amassed huge investments via M&A around the globe. In particular, the Chinese have been aggressive in pursuing M&A in Africa, South America as well as investing in the US.

China has pursued an extremely aggressive M&A strategy in cross-border deals across the AP region. Chinese acquirers are buying stakes in both cross-border and foreign companies to get access to resources, markets, and technology, among other reasons. The question is at what pace with this effort continue as China and the AP region face a global economic slowdown, inflation, increased taxation, and increased government controls that constrain M&A activities going forward.

This year China has also announced certain new laws that block foreign investors in certain business area. In 2022 there has been a 49% decrease in foreign holdings within China. Foreign exchange reserves in China declined by $49.2 billion to $3.055 trillion in August of 2022, the lowest since October of 2018 and a significant contrast to market forecasts of $3.079 trillion. Another factor in China is that there has been a trend toward high valuation of existing portfolios. This is causing a potential speed bump in deal making based on the difficulty of achieving a suitable return for the dealmaker.

August 2022 was the second consecutive month of decreases in China’s monetary reserves. This was mainly due to general dollar strength based on expectations the Federal Reserve will continue aggressive policy tightening amid global recession fears. The Yuan fell 2.24% against the dollar in August, while the dollar rose 2.7% against a basket of other major currencies. Meanwhile, gold reserves fell to $107.49 billion at the end of August from $109.84 billion at the end-July. (Source: People’s Bank of China)

In lots of ways China is still coping with the fallout stemming from Covid and various policy decisions such as shutting down entire cities such as Shanghai. China’s surveyed urban unemployment ticked down to 5.3% in August 2022 from 5.4% in July, pointing to the lowest level since January. The latest print underlined continued efforts by the government to spur the momentum of economic recovery as the COVID situation improved further, with Beijing targeting the 2022 jobless rate to stay around 5.5%.

In this year’s government work report, Chinese Premier Li Keqiang projected that gross domestic product would grow by 5.5% in 2022, with it being 8.1% last year. Albeit the economic growth could actually be down by 2.6 percentage points, but the government still wants to keep the surveyed unemployment rate in urban areas under 5.5%.

M&A activity in AP has been affected by a variety of macro issues. As of August of 2022, the result of all activities has been that China M&A deals held up well in the first half of 2022, with 6,173 transactions. However, their value fell to US$236.7bn – a half-year low last seen in 2014. There were 22 “mega-deals” (> US$1bn) in this period – less than half the number in the previous six months.